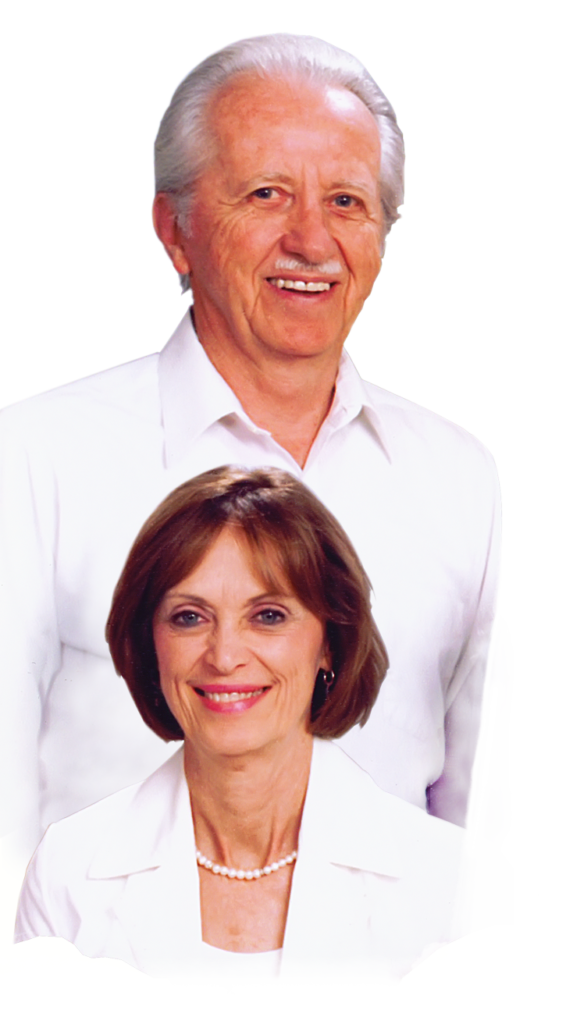 Rick Strombeck was born in a family of faithful Christians, being the representative of the 6th generation of believers. Bette was born in a pastor’s family, whose home was always filled with music and guests. They met in a Christian college in Indiana, both gaining Master’s Degrees in Education. And soon after that they got married and gave birth to two sons: Rick and Randy. Now they have six grandchildren, seven great grandchildren and this is not the limit.

Rick and Bette Strombeck moved to El Paso Texas, on the border with Mexico in l962, not only assisting in a new church plant but ministering across the border. Son Rick was 4 and Randy was new born.

In l966, they accepted an opportunity to move to the Cayman Islands, in the Caribbean. Rick directed a well-established Christian school. Both of them taught in the classroom, and they ministered with the Youth at the church. Two major pastors today are fruit from those years.

In l969, they moved to Florida but continued traveling to eventually include Guatemala, Panama and El Salvador.

The charismatic renewal had just started but swept through America in these next years, forever changing the face of Christianity. Every denomination was touched by the power of the Holy Spirit, Rick and Bette in l974.

In Bogota Colombia in l977, while preaching at a large Youth Conference, the Holy Spirit showed them in an open vision, the places of the work for the next twenty years.

Nancy Neener, (later Davey) was part of the first small team who took that route by land beginning in La Paz, Bolivia, over the mountains to Lima Peru, up the coast to Guyayaquil, Ecuador, then to Quito. Across more and more mountains until they reached Bogota, Colombia. It took seven weeks. There was teaching, signs, wonders, preaching, prophesying, healings and miracles, traveling by bus, boat, truck, jeeps, cars, small old planes, and even walking. It began laying the foundation of what is there today.

After traveling many times to those four nations, a bible school was begun in Lima, Peru among the charismatics Jan. 1981.

The first year had 70 students gathering together one weekend a month for 20 hours. At the end of the first year, these students wanted to re-teach what they have learned so they opened 15 schools. Rick and Bette, plus many teachers that came with them, continued to teach the second year with the original students. Of course at the end of the second year, those fifteen schools wanted to teach what they had learned, so the second year students opened 35 more schools. Other schools opened in the provinces so it ended up that third year with 58 schools and 3,000 students. All of the teachings were given out in the old fashioned mimeographed form, and some copies are still floating around today. The Word of God is good forever. From these students, many congregations began to spring up all over the city. They are flourishing today. They helped establish Agua Viva (Living Water Church) and encouraged many others. At the same time in La Paz, Bolivia, Grace and Truth Bible School was established, where students came from all four countries to live together in a big house and study full time for a year. Students came from jungle villages not seeing indoor plumbing before as well as other students from city homes well furnished with maid service. It was a wonderful clash at the beginning of the year but they all ended up best of friends.

In l979 during one of their trips to Quito, Ecuador they met a young University student, Kathy Bastidas, 19 years old, who was hungry for God. It was instant love. She became an excellent Bible teacher and started Community of Faith in Quito. She came to La Paz, Bolivia in l983 to teach for several weeks and met David Ingman, who was a little older student from Florida. They married a few years later and began pastoring the church together. They have congregations in seven other cities now. Most of the pastors are from the first group of youth who dedicated themselves in the late 70′s and are found faithful.

Even as the ministry was growing, the Holy Spirit began to speak prophetically to them about working in the Soviet Union. They pondered these things until one day they met a young evangelist from the USSR who invited them to come and do what they were doing in South America.

A preliminary trip was taken during the whole month of August 1991, the very time the Soviet Union dissolved and released Ukraine, where they were at that time, to become free. It was no accident that they were down town KIEV when the USSR flag came down and the Ukraine flag went up, amidst many tears and little flags waving. The Holy Spirit showed them in the very first trip how the ministry would develop with a Training Center first and then Fellowship for Pastors and wives. They started a monthly teaching weekend in a Pentecostal church that met in the woods Jan.92. They were invited to begin a Ministry Training Center in September of 92 with the pastors and leaders from 7 churches that had recently been established. It developed into a two year training course with homework, tests, and accountability. Many churches participated. After 13 years, thousands graduated and it evolved into a Video School, which continues today. It is in other nations where there are Russian speaking churches.

As the churches grew in Latin America, there was less need for their presence. More time was available for Ukraine. In 1995, Rick and Bette began to invite pastors from the city and surrounding areas to a monthly luncheon in a hotel or dining room. The goal was just fellowship. They began in Berdychiv with 3 pastors and wives. Spring and fall retreats continued growing then began to include the youth. This is a normal progression when you grow! Make room for the next generation. Rick and Bette traveled to churches all over Ukraine each weekend to fellowship with the pastors and their families, as well as prophesy and share the Word of the Lord in church. They became a large family.

In the very first meeting in the woods and in the very first class in Sept. 1992, sitting in the very first row was a young man by the name of Slava Kostenko. At the end of the first year, he told them he wanted to work for them. They replied that if he could speak good English by September, he would be welcome. When they returned, he did. It started a long trail of learning and changing, Slava was preaching, teaching, prophesying, traveling and administrating Koinonia.

Their sons and wives and grand children have participated in the ministry there. Their son Rick began the transition to include the Youth in the Koinonias by planning extreme sport retreats with youth and dads, to help them share the vision.

Their second son Randy started the Youth Culture meetings that are continuing to grow. They are reaching Ukraine, Europe and the USA. The love of the Father is transforming the culture through these youth and their gatherings. You will find them on this website.

Bette’s brother, Darrell Davey and his wife Nancy have worked consistently teaching, traveling to churches, and in administration, even until now.

Victor Ptavshevskyy studied at MTC, and then began to develop the Media outreach. Volodya and Liuba Kogut also attended the first meetings in the woods, the first classes of MTC and continue to work with the Video Schools. Ira Iaremchuk came up through the youth culture gatherings and has now become their administrator. The Lord has brought together a faithful family.

We are all KOINONIA, a fellowship so sweet it hints of heaven.