10 Differences Between Children and Sons 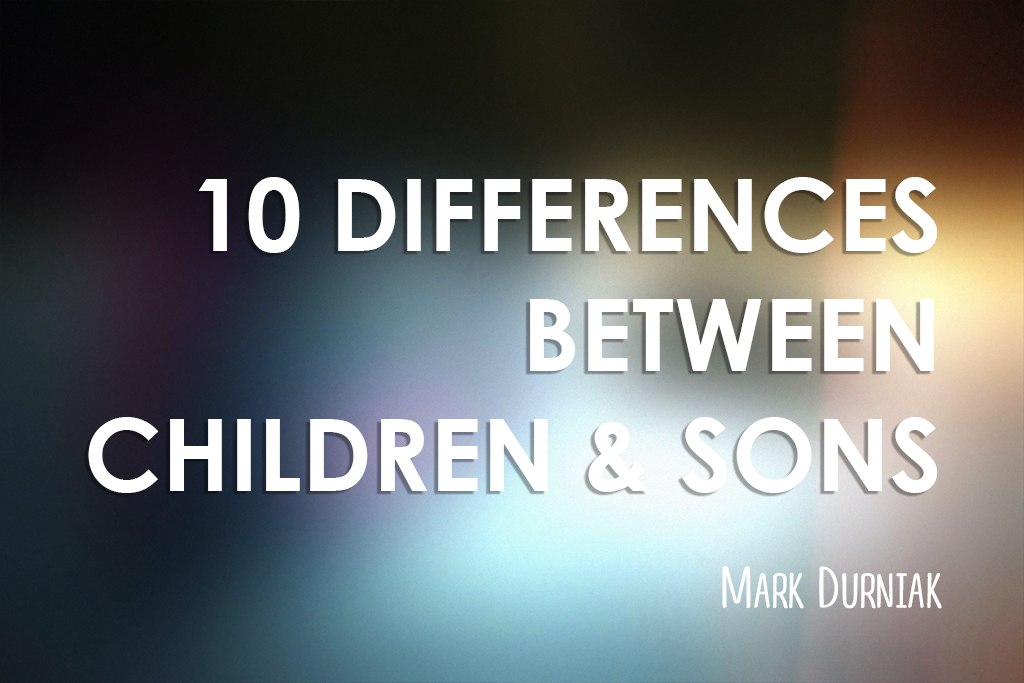 23 Jun 10 Differences Between Children and Sons

1. Children talk about going to heaven. Sons talk about heaven on earth.

It’s simple: Jesus taught the disciples to pray that His Father’s will be established on earth as it is in heaven. The true reward of the family of God is the manifestation of the heavenly on the creation. Yes, paradise with Jesus awaits us after our natural death. Sons don’t want to rest until they set the creation free from its captivity.

As long as we need someone to tell us what to do – including the Lord Himself – we are children. There will always be times of needing to hear His voice, but sons don’t need a word from God to move. They know who they are, who He is in them and they act accordingly.

Becoming the voice of the Lord in the earth is one of the finish lines of a son. Elijah didn’t do anything without a word from the Lord. Elisha asked for double of Elijah’s anointing and we never once see Elisha acting on a word from God. What we do see is God acting on the words and actions of Elisha. Follow commands to know the heart of the commander. Then BE the command.

4. Children don’t know the difference between childish and childlike. Sons do.

Sons know when it’s time to put away childish things. Yet, they know that imagination, faith and hope are not childish. They are doors to the kingdom.

Children struggle to discern between gossip and true care for another, need and want, lust and love, judgement and justice. As they do learn to discern, they transition from child to son.

Faith is the evidence of things hoped for. Children see the dream and expect it to just happen. Sons realize that dreams become reality through rugged steps of faith called work. When a child sees the work required, they revert back to dreaming.

A son puts his had to the plow and does not look back until the vision is a reality. This is the Spirit of the Son in the sons of God – we endure whatever is between us and the joy set before us, just like He did.

Retaliation, revenge and resistance are common among children. When pushed, they push back. In doing so, their brother becomes their source and standard.

The Father is that source and standard for the son. How HE treats a son is how he treats his brother. A son doesn’t need the love of another in order to love back. His love tank is continually filled by his Papa.

Sons become fathers. Fathers think, plan and live for future generations. They understand they are the foundation of their family. They welcome its weight upon their shoulders.

Children are not ready to be fathers because they value what benefits them in the moment. What’s fun and exciting takes precedence over what is solid and lasting. This is appropriate for a season. It must eventually give way to counting the costs because people are counting on you.

The kingdom is not a spectator sport. The king has done His work and has empowered the sons of God to advance His kingdom.

Children are simply playful about Christianity, enjoying the shallow end of its value.  Sons can be playful but understand the need to plumb the depths of their Father’s heart.

Children are concerned about their natural lives and responsibilities.  Sons see those as simple vehicles for their divine call.

Children bury their dead, build bigger barns and serve mammon.  Sons know that if they seek first the kingdom, all these things will be added unto them.

Every person has a purpose. Some see it as a demand placed upon them. A demand is a drudgery, a yoke of slavery – something that MUST be done. This is because the call has yet to connect with the divine DNA deep within.

A son first realizes WHOSE he is and then connects that identity to a call. It’s then that the call is not a burdensome command but a deep and passionate WANT.

Children have to do chores for Dad. Sons desire to carry the kingdom with the King.

Adults who command to get others to do things reveal their immaturity. Those who inspire and relate to empower another are the mature.

It’s a sad reality – a full-grown adult still living as a child. And it is a curious miracle to see a child having a son’s maturity. When man realizes that the spirit has no age, natural children can accelerate into sonship.

Growing up physically happens with no effort. Maturity is an individual choice.

Let’s grow up and become the full measure which belongs to the stature of Christ.