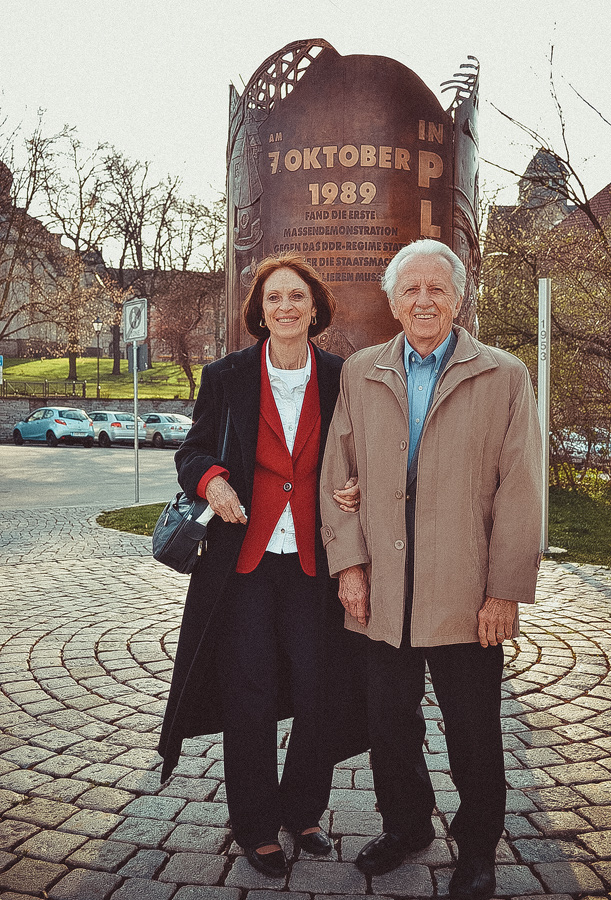 As we visited 6 churches in 13 days, we felt a new refreshing from what the Holy Spirit is doing. Sharing with pastors and families, the leaders and churches was a great joy for us. Thank you for sending us.

Speaking the prophetic word to pastors Slavik and Oxana in Plauen, in eastern Germany, we gave them confirmation of God’s direction. This congregation is in the midst of a huge wave of the Spirit, bringing in many new young people! The prophetic word to the leaders next day brought a terrific response!

The Prophetic Word ended, “It’s time to FLY”, so they spread out their arms in response to fly!

One surprise was meeting La La, a graduate of our Bible School in La Paz, Bolivia 30 years after she graduated! Having married a German, she has spent many years in Berlin raising 3 children and participating in a church there.

Showing us the town, we discovered that Plauen was the place that initiated Perestroika, or the reunification of Germany, by having a large demonstration in the town square….the movement spread from there. It even went from Germany to the Soviet Union. There is another marker in the city which shows that they were first town to accept Martin Luther’s reformation en masse!

Rick’s birthday was celebrated with the Neufelds, first in their home with a traditional goose dinner. THEN the congregation surprised him when he walked in that evening, singing Happy BIrthday and applauding!

They gave him several gifts, a traditional German hat and a painting.

Before we shared the Word, we gave diplomas to the recent graduates of the Video school. Then the pastor called for all those who had graduated to come on the platform. What a harvest!!! We were blessed to pray over them all once again!

After the service we were invited downstairs and 150 had gathered for another surprise party! And another Happy Birthday song! This was his biggest birthday party EVER!! It lasted all day!

The last stop was Bonn, a new church pastored by Alex (man on the left) and Elvira (between us). The Neufelds came to encourage them, also.

Pray for the church in Germany. It seems like we are all battling the influx of godlessness. It’s time for a reformation and we can all do our part to bring it. Blessings,
Rick and Bette